I ran across an article about my friend Fred the other day. Jo Ann and I had first met Fred at the International Congress of Genealogical and Heraldic Sciences in Ottawa in 1996, and have had the pleasure of seeing him again at the Congresses in Dublin (2002) and Quebec (2008, whence the picture below was taken).

For those of you who haven’t had the chance to meet him yet, Frederick G. Brownell is the former State Herald of South Africa (he still held that office in 1996), and designed the flags of South Africa and of Namibia. And a really likeable, unpretentious and unassuming man, to boot. 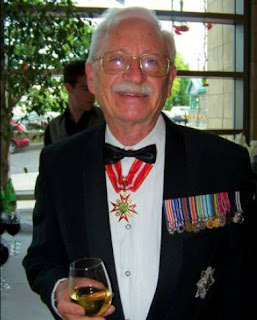 Anyway, as I say, I ran across an article in the Daily Dispatch Online, dated April 28, 2010, that talked about the Eastern Cape region of South Africa and two of its most famous residents: Enoch Sontonga, who wrote South Africa’s national anthem; and Frederick Brownell, who designed South Africa’s flag. (Which the article says is the third best-known flag in the world.) The full article can be found on-line at: http://www.dispatch.co.za/article.aspx?id=397509

Anyway, it was a real treat to find an article praising an accomplished herald, an honored vexillologist, and a man I feel privileged to be on a first-name basis with. Way to go, Fred!
Posted by David B. Appleton at 6:00 AM