Heraldry in the News! (And Where I Take Issue With a Quote)


There's a recent (June 8, 2022) article on the website of the Canadian Broadcasting Corporation about the acquisition by the Beaverbrook Art Gallery in Fredericton, New Brunswick, of a large (2 meter, or about 6 feet for my American readers) heraldic stained glass window. 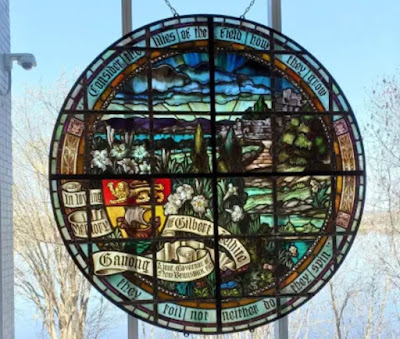 The window was originally installed in 1919 in the Union Street Baptist Church in St. Stephen. However, that building was demolished a few years ago. The church is moving to a new building, and called in a specialist in stained glass restoration, who "discovered" the window as he was restoring the others from the church. As there was no place for this window in the new church building, permission was given to find it a new home. The Beaverbrook Art Gallery was happy to receive it.

The window consists of a landscape and the coat of arms of New Brunswick, and is dedicated to candy-company co-founder and former New Brunswick Lt-Gov. Gilbert White Ganong, who died after less than a year in that office in 1917.

At any event, it's a beautiful piece of stained glass art, not less because of the heraldry it contains. You can read more about this window, its vicissitudes, and its new home on-line at https://www.cbc.ca/news/canada/new-brunswick/beaverbrook-gallery-stained-glass-1.6481926

However, I do have to take issue with one quote from the article. John Leroux, manager of collections and exhibitions at the Gallery, is quoted as saying that "You rarely see heraldry in things like this in church windows."

That may be true enough in Canada; I have not been inside enough churches in Canada to be able to say. But it is most certainly not true of churches in Europe! In support of which statement, I will leave you with the following few representative examples taken in cathedrals and local churches in Scotland, England, Sweden, and Belgium: