An Unexpected Coat of Arms in Heidelberg Castle


For our "last stop" in our review of some of the heraldry in Heidelberg Castle, we find two depictions -- one carved in red sandstone (the first two images taken from different angles immediately below), and one on a painted armorial ceiling boss -- of the Kingdom of the Two Sicilies (sometimes referred to as the Kingdom of Aragon and the Two Sicilies). 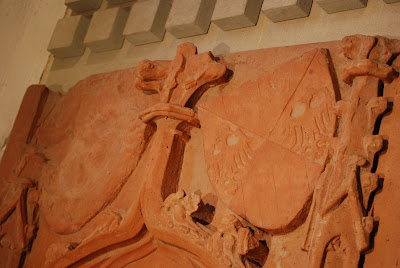 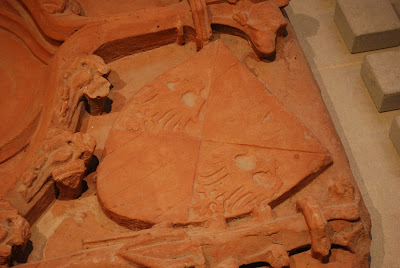 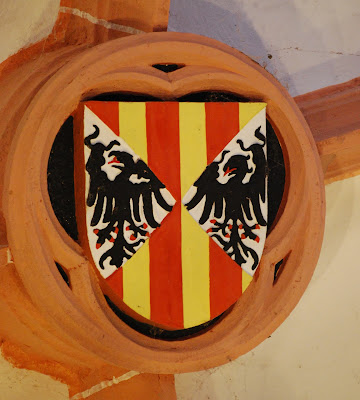 The Kingdom of the Two Sicilies (created from the merger of the Kingdom of Sicily with the Kingdom of Naples; the latter also called itself the Kingdom of Sicily, thus leading to the term Utraque Sicilia, "both Sicilies") consisted of the island of Sicily and the Italian peninsula south of the Papal States. It was the largest sovereign state by both population and size prior to the unification of Italy in 1861. This area of the the Mediterranean world has a long and involved history, much too long and involved to get into here. Suffice it to say here that for a time in the late 15th Century, the Two Sicilies was ruled by Alfonso V of Aragon, hence the incorporation of the arms of Aragon into the shield here..

The arms of the Two Sicilies are blazoned: Quarterly in decusse [per saltire]: 1 and 4, Or four pallets gules (Aragon); 2 and 3, Argent an eagle displayed sable crowned or (Sicily).

The ceiling boss is slightly mispainted: Aragon here is shown as Paly of six gules and or, and the eagles are not crowned.

In the carved (monochrome) depictions, the eagles are crowned, but here, too, Aragon is portrayed as Paly of six.

Despite the errors in the representations of this coat of arms, it was, once again, a bit of a treat to find an unanticipated coat of arms here. I mean, really, when wandering about southern Germany, one does not normally expect to see heraldry from southern Italy, right? Still, kind of cool!