And you can, apparently, find it anywhere!

We had been in Las Vegas, Nevada, doing a bunch of stuff for my elderly mother. One of the things in that "stuff" was cleaning and organizing her house. During that effort, I ran across this little heraldic item: 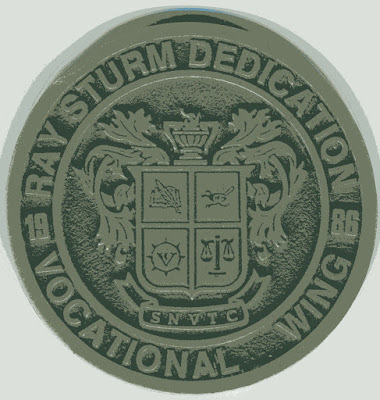 It's a bronze medallion from the February 10, 1986 dedication of a new wing to the Southern Nevada Vocational Technical Center (usually called Vo-Tech then and when my mother taught there, but now it is renamed the Southeast Career Technical Academy, SECTA or Tech).

The heraldry on the medallion is pretty typical of what I've come to expect for the arms-like logos of educational institutions in the United States; that is to say, not great.

I am assuming that the very narrow cross and bordure in the design are designed to be detailing, and not actual charges on the field. The quarterly field has: 1, an open book surmounted by a feather (presumably supposed to be a quill pen) bendwise; 2, a roadrunner (the real thing, not the one from the cartoons which Wile E. Coyote is always trying to kill with all those wonderful contraptions he buys from the Acme Corporation); 3, a sun charged with a "V" (if you were to try to guess the weather in Las Vegas without first looking it up, if you were to say "sunny," you would be correct more than 95% of the time), the "V" presumably standing for "Vocational." the other mark within the V may be meant to be a "T" for Technical, but it is not clearly that either on the medallion or in the scan; and 4, a standing balance (more usually associated with the law and lawyers; I don't know if the school had a pre-law program, so I'm not sure if that's why it appears on this shield). The crest is, naturally enough, a lamp of knowledge.

All this to demonstrate once again that you truly can find heraldry everywhere!