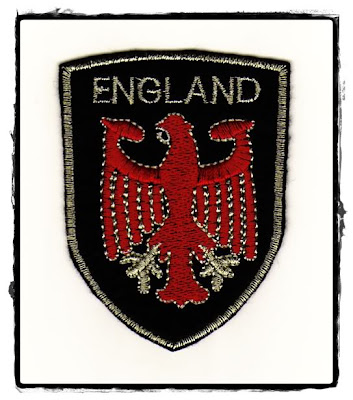 Never mind that it's a red eagle on a black field, which really isn't English heraldic style.  I don’t believe I’ve ever seen such a Germanic-looking eagle associated with England before. I hope I never do again.

I did go ahead and look at some of the stuff in their on-line eBay store, and they have some patches with the Union flag and with the cross of St. George on them, so it’s not a total loss. They’ve also got an heraldic patch consisting of a crowned shield with a lion rampant and the word “Sexy” on a chief (shown below; personally, I'm not certain that I could carry off wearing it), as well as a patch for Switzerland and patches with the flags of Turkey and Spain. 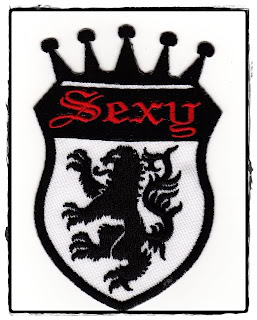 In the meantime, if you think you might be interested in purchasing this little gem (at the time I looked, there were still five available, and there was free economy delivery.  For myself, I'm going to pass this time), you can find it on-line at: http://www.ebay.co.uk/itm/ws/eBayISAPI.dll?ViewItem&item=280625004888&ssPageName=STRK:MEWAX:IT
Posted by David B. Appleton at 6:00 AM