I sat down and rewatched one of my favorite old "bad" movies the other day, The Black Shield of Falworth, and I picked up on a couple of items that I hadn't caught in prior viewings (at least not that I remember). 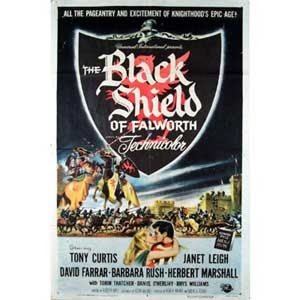 One was the shield given to Sir Miles Falworth to use in the trial by combat near the end of the movie. Though I'd seen the movie a couple of times before, this time around I noticed that the red griffin on the black shield was painted like it was a crest; it was a griffin rampant atop a torse (which torse would be blazoned, in heraldic parlance, as "gules and gules"). In the image of the movie poster, above, you can actually kind of make the torse out under the word "Technicolor".

The other thing that I noticed this time around was in the big book of heraldry that Miles was looking through in the Earl's library. While each page had a different coat of arms, the one that really caught my eye this time was the arms of George Washington, copied, from what I remember of the style it was drawn in in that book, from Washington's bookplate (below, from a souvenir postcard). 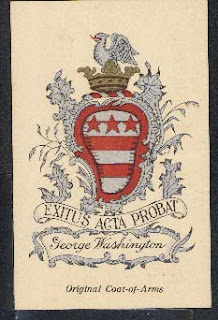 It continues to surprise me what heraldry you can find, and where, even in old Hollywood movies that you've seen before.
Posted by David B. Appleton at 6:00 AM