A New, and Heraldic, Mascot

The College of William and Mary in Virginia has been in the news lately. They have selected a new mascot to replace Colonel Ebirt (“tribe” spelled backwards), the gold and green frog (sometimes described as “an amorphous blob”), which had replaced the even earlier “Pocohontas” and “tribe guy”. (The College’s team is known as the Tribe.)
But those days are gone. Following a search which included some 800 submissions, five finalists were selected in December: a griffin, a king and queen, a phoenix, a pug and a wren. And finally, in April the new mascot was chosen: the griffin.

In discussing its new mascot, the College says:


William & Mary's Griffin is a mythical creature with the body of a lion and the head of an eagle. The coat of arms of King William and Queen Mary was adorned with lions, and the lion's body of our mascot evokes our historic royal founding and early history. The eagle's head of the Griffin suggests the national symbol of the United States and represents the presidents, leaders, and productive citizens whom William & Mary has trained for centuries.

The College of William & Mary in Virginia is one of only two U.S. colleges or universities granted a coat of arms by the College of Heralds in London. Our mascot, the Griffin, is often depicted in British heraldry.

There’s a story dated April 8, 2010, about the introduction of the Griffin on the College’s website at http://www.wm.edu/news/stories/2010/mascot-revealed-123.php

And though they make something of a big deal about having been granted a coat of arms by the College of Arms (back in 1694), I wasn’t able to find a copy of it on their website except for a brief mention of the blazon (and the photograph below) of the badge and chain made for the Chancellor in 1987. 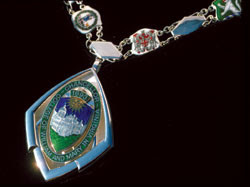