Wikipedia says that the term "a New York minute" "is an informal term used to mean a very short period of time. The term refers to the common perception that the people in New York City are hurried and impatient. Johnny Carson once described a New York Minute as being the time it takes ‘From the (traffic) lights to turn green, till the guy behind you starts honking his horn.’ During the late 1980s crime wave, David Letterman defined a New York Minute as the length of time it took to be mugged in New York City."
I was reading through a copy of Mr. Punch’s Book of Arms (which, as you can probably figure out from its title, is satire wrapped in the cloak of heraldry, attributing coats of arms to political and contemporary figures), and in the arms for "Viscount Stanley of the Congo" ran across the blazon (for the third quarter) of "a New York herald blowing a trumpet of his own in exultation over repeated columns of copy sensational to the last." 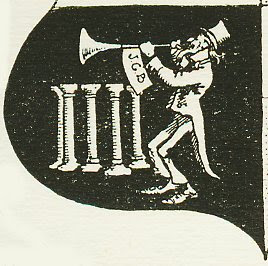 Anyway, the "a New York herald" - which theoretically could be a College of Arms-type herald but which could also be a newspaper, like The New York Herald - got me to thinking about two things. The first was the phrase "a New York minute", and wondering if a New York herald was considered somehow faster than other heralds. The second was heralds in what was the British colonies in America. There have been two heralds in the colonial period of what is now the United States that I can recall:

There was the Carolina Herald,* Laurence Cromp (appointed 1705, when he was also York Herald), who was to grant arms and crests to the landgraves and cassiques, colonial nobility of the low lands, of South Carolina. He does not seem to have actually granted any arms, though he may have had a hand in the design of the seal of the Lords Proprietor of the colony (below). Cromp died insolvent in 1715; no successor was appointed. 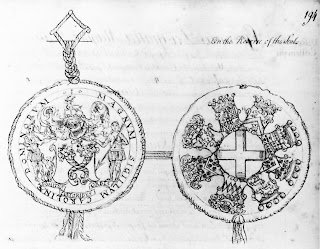 Another English herald in the Colonies was William Crowne (Rouge Dragon Pursuivant) who emigrated to America in 1657. He does not seem to have had any official duties here, and he resigned from the College of Arms a month after attending the coronation of Charles II. He did bring with him the Promptuarium Armorum, the book of arms of his predecessor as Rouge Dragon, William Smith. That book ended up for a time in the possession of the Gore family of Boston, Massachusetts, painters and designers of heraldic embroideries, as one of the three main sources for their own 18th Century book of arms, now commonly known as the Gore Roll.**
Alas, I do not find a "New York herald" other than the newspaper (published 1835 until 1924, when it merged with The New York Tribune).
* His full title was "President of the Court of Honor and Principal Herald of the whole Province of Carolina."
** A book about the Gore Roll, the most complete and accurate to date on its history and contents, has been written by David B. Appleton, and is available for sale at www.appletonstudios.com/BooksandGames.htm
Posted by David B. Appleton at 8:23 AM