Do They Really Need a New Logo?

The post for May 4, 2009, over at the Cheshire Heraldry Web Journal (http://cheshire-heraldry.org.uk/weblog/) is a great one about the adoption of a new logo by Stirling Castle, and its cost. That posting got me to thinking about the times over the last several years where one organization or another, even some who already had perfectly good coats of arms that they have been using for years to "brand" themselves to the public, pay sometimes ridiculously large amounts of money to some commercial design firm to develop for them a "new," "more contemporary," or "more relevant" logo, with which they often replace their "old", "outdated" coat of arms. 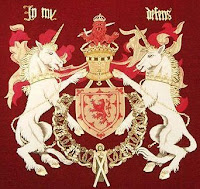 In the example of Stirling Castle, it seems to me that if they really wanted, as they said, to "convey a sense of depth, experience, royal authority, richness and intimacy" of the Castle, they could have used the coat of arms here, which appear on a tapestry right there in the Castle.

I have to wonder, though, if part of the problem doesn’t lie in the fact that many people seem to think that a coat of arms is just like a trademark, in that it absolutely, positively must be drawn exactly the same way every time it appears, no matter what. Because that is clearly not the case, as a minimal amount of study would serve to demonstrate. Take, for example, the coat of arms of the City of Dublin, Ireland. The arms appear in a very traditional fashion on a bicycle rack; in pretty traditional fashion on many of the city’s street lamps, both colored and monochrome (most in silver, but some in gold paint); in a simplified but still fairly traditional version on waste receptacles placed about the city; in a modern, logo style on city-owned services sites and vehicles (again, both colored in blue and white or monochromatic in black and white); and finally in an extremely stylized fashion on metal services access covers on the sidewalk. 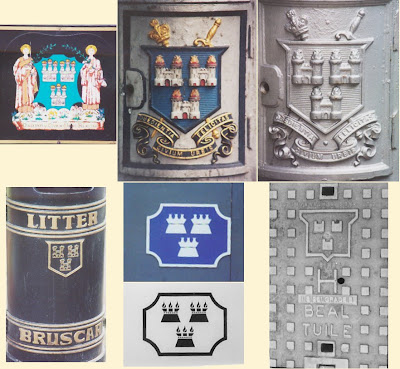 And yet, each version, traditional and modernized, is the same coat of arms that the city has used for who knows how many years. (The arms were officially granted in 1607, but elements of it appear in the city seal as early as the 13th Century.) No need to pay some design firm thousands or even hundreds of dollars/Euros/pounds sterling for a new design. Just update the depiction of the coat of arms you already own! (And then take the money you’ve saved and give it back to the taxpayers from whom it came. See? Heraldry can be of positive benefit, even in our modern times.)
Posted by David B. Appleton at 9:17 AM