Scottish Football and Heraldry, a Bit of Humor


Apropos of the recent articles about the controversy over Ayr United F.C. having to change its logo because of Scotland's heraldic laws, here's a cartoon from last April (http://www.dailyrecord.co.uk/news/local-news/airdrieonians-fans-launch-petition-bid-5524556) when the Airdrieonians F.C. were facing the same thing: 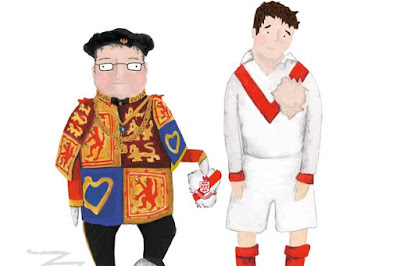 You know, under Scottish heraldic law, this could - in theory - happen! The Procurator Fiscal to Lyon Court has the authority to erase unwarranted arms, to "dash them furth of" stained glass windows, and to break unwarranted seals, or to seize movable goods and gear where unwarranted arms are found.

And that's how you enforce the laws of heraldry, by golly! At least in Scotland.