It may not always pay to double-check yourself when researching or writing about heraldry, but there are many, many times when it does, and so it's something that you, and I, should make a habit.

I had this forcibly brought to my attention the other day, when I was finishing up the research on a presentation I've been preparing on the history and usage of the arms of the United States.  As a part of that presentation, I give examples of some of the individual states of the union which incorporate the arms of the U.S., or some variation of them, in their own official insignia.

One of those examples was the State of Mississippi.

Mississippi has used the same seal since before it became a state way back in late 1817.  The seal has been used from 1798 when it was a territory.  (It was bigger back then; the Territory of Mississippi also include what is now the State of Alabama, another entity which incorporates the arms of the U.S. into its own arms.)  It used this seal from that time until January 31, 2014 (just earlier this year) ... 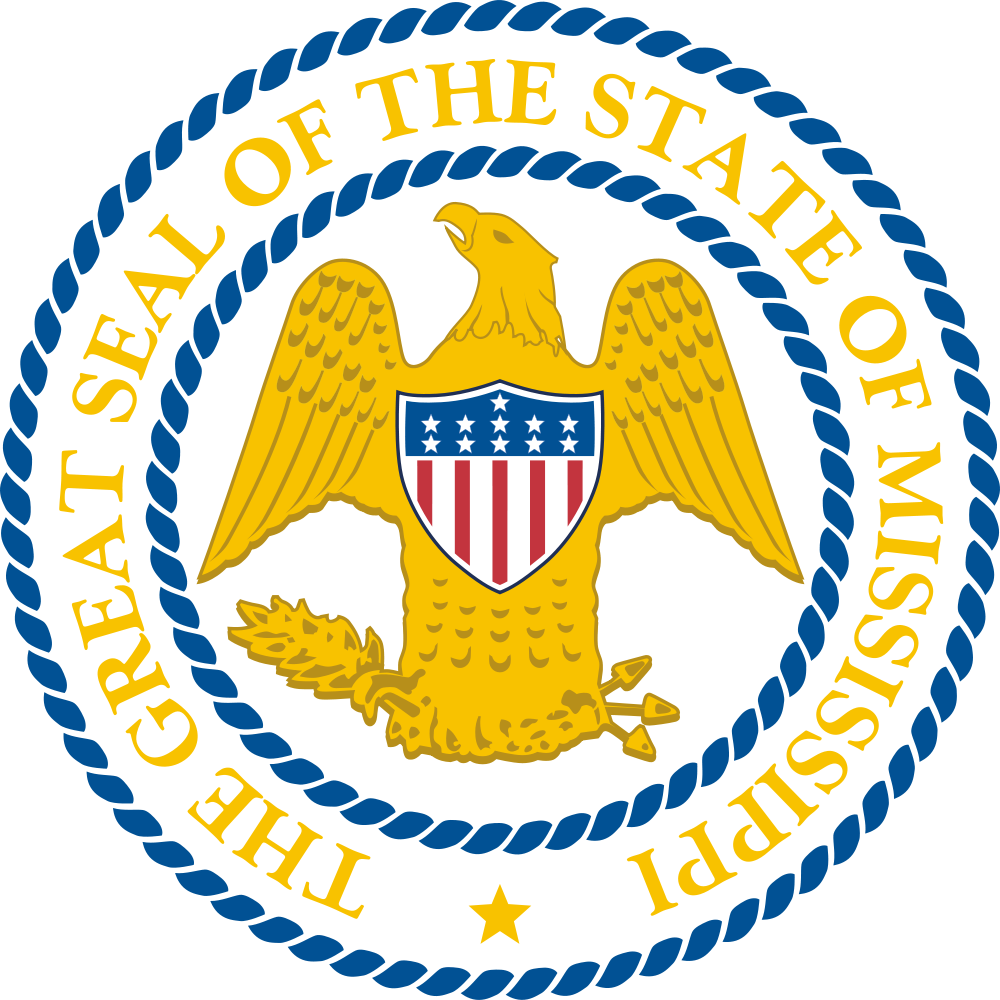 ... at which time it added the words "In God We Trust" to the legend on the seal. 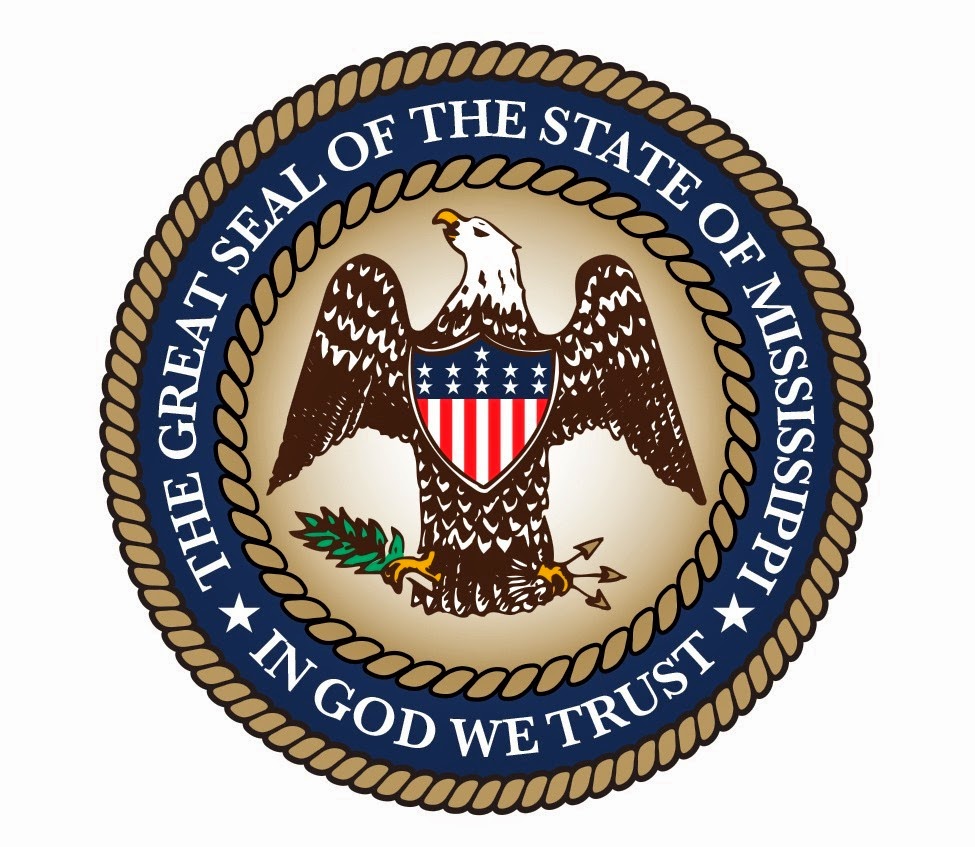 I had been looking at both versions of the state seal and trying to figure out the reasons for the fact that the shield only has eleven stripes while the arms of the United States has thirteen (for the original thirteen colonies), and has eleven stars on the chief, while the arms of the U.S. has a plain blue chief (with no stars).  And not knowing at the time the dates of usage of the seal, I was speculating that it may have been a reference to the short-lived Confederate States of America, of which Mississippi was one.

But the date for the use of the seal, beginning in 1798, was well before the 1861 establishment of the Confederacy.  So I was left with an unsupported assumption, one that seemed to be incorrect.  Doing from more research, just to see if I could find out why eleven stripes and eleven stars, I ran across a photograph of the original seal matrix for the Territory of "Missisippi" (the name is missing an "s").  I've reversed the image here so it appears as a positive: 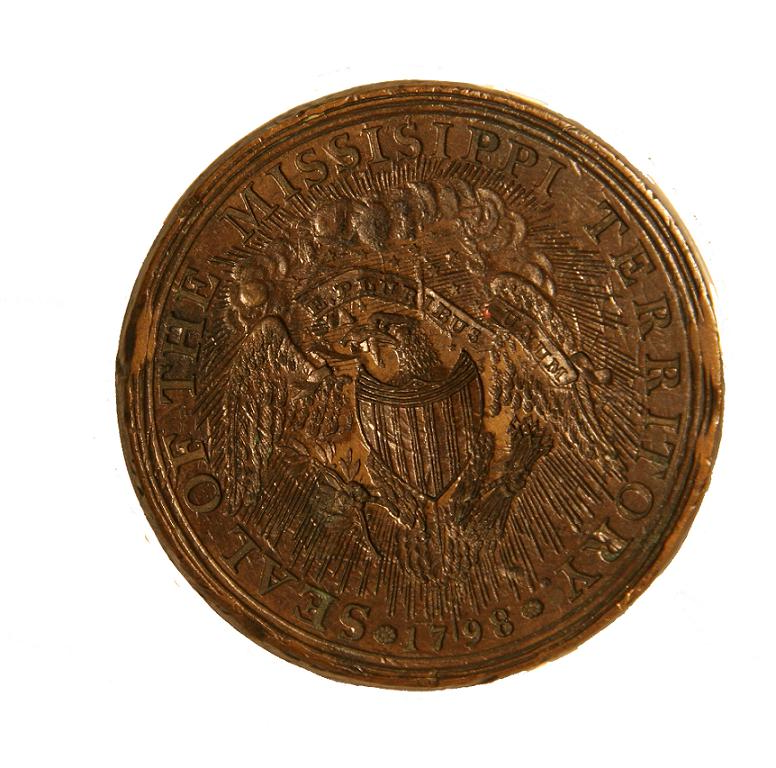 As you can see, the arms here are actually those of the United States which had been adopted in 1782, heraldically hatched with thirteen white and red stripes and a plain blue chief, and with the eagle supporter holding an olive branch in its dexter talon and thirteen arrows in its sinister one, with the motto scroll in its beak with the words E Pluribus Unum, and the crest of stars in a blue sky surrounded by clouds and a glory (the sunshine-like "rays").

Well, then, when did the state start using only eleven stripes and add the stars to the chief?  I don't know yet.  I'll have to do some more research into the matter.  And it may turn out that my original assumption - that the number eleven has to do with the Confederate States of America - might have been correct, and that all this research will just lead me full circle back to confirm that.  If it does, great.  If it doesn't, and there's a different reason for the number of stripes, that's great, too.

But at least I will know for certain, instead of making an unfounded assumption.  One that could have been wrong by some seventy years.

Email ThisBlogThis!Share to TwitterShare to FacebookShare to Pinterest
Labels: Mississippi