With all the heraldry we saw in our perambulations (now there's a word I don't get to use in everyday conversation!) about the city of Florence, every once in a while we would run across a coat of arms (or, as here, three.  No, wait!  Four!) that were surprising if only because they seemed so far from home.  As we strolled down the Via Alfonso la Marmora we came upon a church with a square bell tower which had several coats of arms carved on its sides. 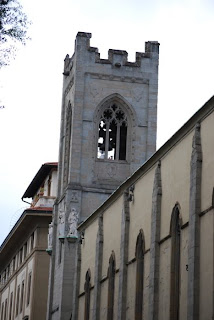 So far, not much out of the ordinary, right?  Then we got close enough to identify those coats.  On three sides of the tower were the arms of Ireland (Azure a harp or stringed azure), Scotland (Or a lion rampant within a double-tressure flory-counteryflory gules), and England (Gules three lions passant guardant in pale or)! 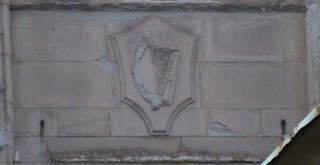 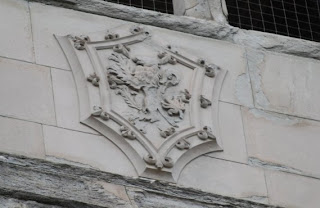 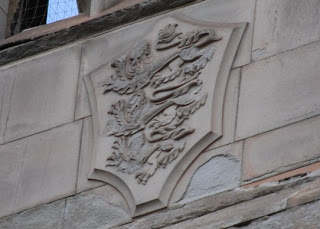 The explanation for the presence of these coats of arms was discovered after turning the corner where the Via Marmora meets the Via Per Antonio Micheli.  Number 26 at the corner is the Chiesa Evangelica Valdese, the Anglican Church of the Holy Trinity (Chiesa Anglicana della Trinitá).
And as if the sign were not sufficient explanation, one of the coats of arms flanking the main door was that of the Archepiscopal See of Canterbury (Azure a pastoral staff or ensigned with a cross patty surmounted by a pallium argent fimbriated and fringed or charged with four crosses patty fitchy sable.) 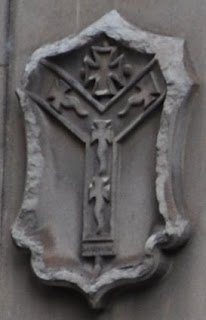 So, maybe not quite so out of place as they originally seemed when we first saw them while walking down the street in Florence.
Posted by David B. Appleton at 6:00 AM