In our wanderings about the city, we came across the Basilica of Santa Maria del Santo Spirito (St. Mary of the Holy Spirit), more often referred to simply as Santo Spirito, Though it has a very plain exterior – especially when compared to some of the other churches in the city – it has one feature that is very attractive to heraldry enthusiasts: there is above each of the windows on the ground floor an inset plaque containing a coat of arms. 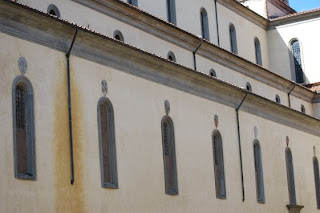 Some of them are more worn than others; on some the colors have faded so far as to have nearly disappeared. But all in all, I found it to be a great, if a bit understated (at least compared to some of those that can be found in the city), display of heraldry. The following are three of the coats of arms along the exterior, selected basically at random from the photographs of all of them that I took while there. 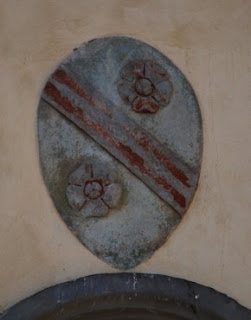 This first is the arms of del Riccio: Or a bend between two cinquefoils gules. 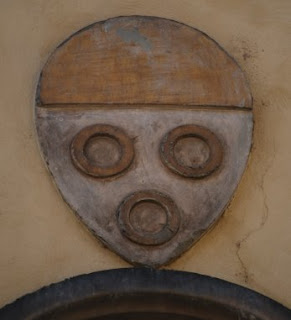 This one is the arms of Velluti: Gules three annulets and a chief or. (The gules having faded to nearly white, I’m afraid that I think of “Mr. Bill” from the old Saturday Night Live show, http://www.mrbill.com/, whenever I look at it. “Ohh, nooo!”) 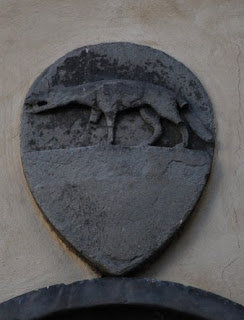 And finally, the arms of Biliotti: Gules on a chief argent a fox statant gules.
Posted by David B. Appleton at 6:00 AM