Merry Christmas to All!

Christmas is nearly here, with all of the joy (and the stress) that can come with it. But it’s also a good time to be pondering about the things that we are grateful for. In my case, right now, I’m grateful for the many friends and acquaintances I have made in the heraldry societies to which I belong. And one of the reasons that I belong to these heraldry societies is because of the many coats of arms that these friends and acquaintances share with others in these societies (and, by extension, me). Some of which I find interesting or unusual enough to then share with you.

This time, it being “the season” and all, here are a couple of “coats of arms” shared by one of the other members of the American Heraldry Society relating to Santa Claus “or rather, his annual ‘helpers’.” 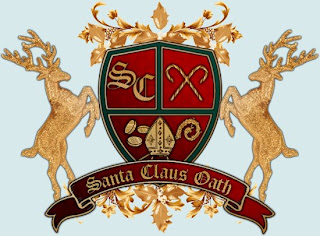 The first is from a website entitled “Santa Claus Oath” (http://santaclausoath.webs.com/coatofarms.htm), a website dedicated to a couple of extraordinary Santas. The website notes that they were creating an “historically accurate” coat of arms for the Oath, though I not sure what they mean by “historically accurate”, because, frankly, I haven't seen any historical coats that look like this. What they did try to do was to include in the achievement charges and elements meaningful to them, and these are described in greater detail on the web page given above. 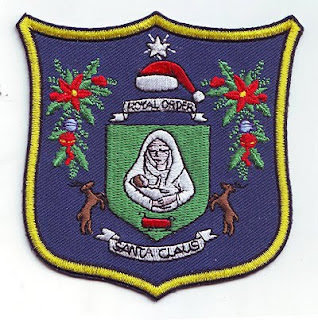 The second coat of arms comes from The Royal Order of Santa Claus (http://www.santaclausregistry.com/aboutus.html), which appears to be a part of The National Santa Claus Registry. The coat of arms is pretty much self-explanatory, with both secular and religious elements portrayed. I find the use of a “Santa” cap used as a “cap of maintenance” might be to be rather appealing.

In any event, I wish you all a very Merry Christmas, and hope for you to have the very best of holidays. And may your lives be filled with heraldry!