Bruce Patterson, Saint Laurent Herald of the Canadian Heraldic Authority, sends out a period email with various items of heraldic "news" from north of the border.  In the most recent one, he gives a link (http://www.parl.gc.ca/information/about/process/senate/Heraldic/Introduction-e.html) to what is a pretty neat little on-line "booklet", a short series of web pages on a single theme, "Heraldic Symbols in the Senate Speaker's Chambers".  In addition to some general background information on heraldry, and a picture of the Speaker's Chambers (this picture here), 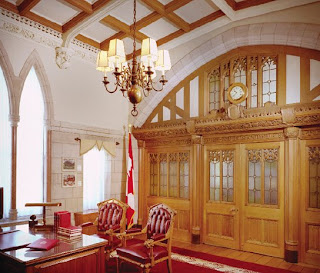 the site's got individual pages on the history, and arms and crests, of the first twelve Governors General of Canada which appear around the Chambers, as well as the three Royal cyphers there.  It's a really well-done site about a little known place with some great heraldic adornment that most of us would otherwise never see.
Posted by David B. Appleton at 8:30 AM