We’ve all heard them - the story of how or why a particular coat of arms bears the colors or charges that it does. For example, the oft-told tale of the Duke of Austria, after a busy day out slaying infidels, came back with his white surcoat drenched in the blood of his slain enemies and, taking off his belt and seeing that the cloth behind the belt was the only remaining fabric unstained by blood (irreverent editorial comment: Eww!), decided to use the red field with a white horizontal stripe as his coat of arms ever since. And often these stories help to tie the family bearing the arms to some significant event in history.
The trouble with such anecdotes, of course, is that most of the time they are created well after the fact and often are demonstrably incorrect. For example:
There is an oft-told story that in 1050 the chief of the Cunningham family of England traveled to Scotland where he aided Prince Malcolm, son of King Duncan who had been killed by MacBeth in 1040. MacBeth also pursued Prince Malcolm and Malcolm was hidden by the Cunningham chief in a barn under some hay. (Another version of the story has Cunningham and his sons out working in a hayfield when Malcolm passed by, MacBeth’s men hot on his trail. They hid Malcolm under some hay in the field, with Cunningham ordering his sons to "Over. Fork over" the hay to cover the future king, thus also leading to the adoption of the Cunningham motto: Over fork over.) MacBeth was later defeated by Prince Malcolm at the Battle of Dunismore near Perth in 1057. When Malcolm became King Malcolm III of Scotland, he rewarded the Cunninghams with a coat of arms consisting of a black hayfork (heraldically, a shakefork) centered on a silver shield. 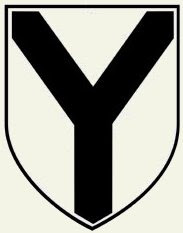 So, what could possibly be wrong it this stirring story? Well, heraldry as we know it did not come into existence until the middle of the Twelfth Century; the earliest coats of arms were all self-assumed, not granted by a ruling noble; and coats of arms do not appear to have been used in Scotland before the reign of David I. Indeed, the Scottish Royal arms are believed to have been first adopted by King William I (the Lion), King of Scots 1165-1214, a full century after Malcolm III. It seems most unlikely that a king who did not have arms himself would have granted arms to someone else.
Posted by David B. Appleton at 8:17 AM

Email ThisBlogThis!Share to TwitterShare to FacebookShare to Pinterest
Labels: myth