East Bound and Down

I was driving down to Lufkin, Texas, about three and a half hour’s drive southeast of where I live hear near Dallas, to participate in a three-day genealogy conference at Angelina College. On my way I was passed by a tractor-trailer rig which was carrying two large enclosed trailers. On the doors of the tractor, and on the sides of the trailers it was hauling, were the coat of arms-like logo of the Union Pacific railroad company. Since I’m not into attempting to drive at high speed and take photographs at the same time, believing that the results would in all likelihood be somewhat less than optimal, I was lucky enough to pass by him a little later when he stopped at a gas station and restaurant. So I pulled in, grabbed my camera, and took a few quick shots. 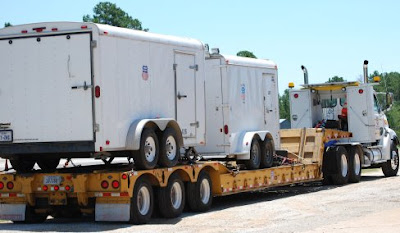 I’ve written about this logo before; two years ago I found a depiction of it in downtown Omaha, Nebraska. (http://blog.appletonstudios.com/2009/09/heraldry-in-americas-heartland-part-4.html) version found in Omaha, however, was not colored. Here, as you can see, we have full-color versions of the UPRR shield/logo. 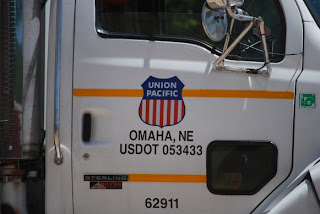 The logo is basically the arms of the United States, but with the tinctures of the shield reversed (paly gules and argent - red and white - instead of paly argent and gules - white and red). And, of course, there’s the addition of the lettering on the blue chief. 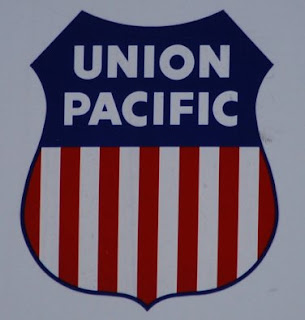 Still, it goes to show that not only can you find heraldry everywhere, sometimes it will find you!
Posted by David B. Appleton at 6:00 AM