What’s with Virginia and not being able to get the colors of the Royal Arms of Great Britain correct? I’ve written earlier about the problems with the colors of the Hanoverian Royal Arms on the Governor’s Mansion in Colonial Williamsburg (back on February 3, 2009). Now I’ve found another example, this time of the Stuart Royal Arms.

There is a church at the original Jamestown, Virginia settlement which, though mostly reconstructed now, was built beginning in 1639 over (though not quite on) the foundations of an earlier church erected in 1617. For many years, only the tower of the church remained, and that in a partially ruined state. The present church was built by the National Society of the Colonial Dames of America in 1907 (the 300th anniversary of the first settlers landing there) atop the original 1617 foundations, which now may be viewed under glass on the floor inside the church.

There are several memorial plaques inside the church, some of which are armorial. During a recent vacation in Virginia (I noted in an earlier post that I was there to give a presentation on heraldry to the Virginia Beach Genealogical Society), I visited the site and took pictures, which I will share with you over the next several blog entries. 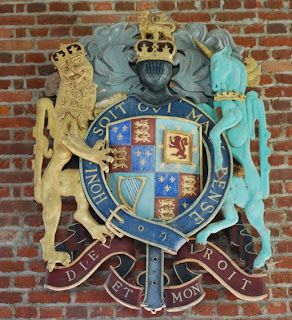 However, in the version of the Royal Arms in the Jamestown church, the colors of the English quarters (Quarterly France Modern and England) are fine, but what’s the deal with the bleu celeste on both quarterings for Scotland and Ireland, not to mention the unicorn supporter?

For example, the field inside the Scottish tressure is fine, as is the lion. But the tressure itself has been painted gold instead of the same red as the lion, and the field outside the tressure (which should be the same yellow as inside the tressure) has become bleu celeste. As has the blue field of the quarter for Ireland. And so is the unicorn supporter, which should be white! I might be willing to cut them a little slack for the colors of the mantling, since it looks to be pretty faded, but, c’mon, is red and white really all that hard?

I mean, it’s not that difficult (if you don’t already know) to find what the colors should be. Sixty seconds on the internet doing an image search for “Stuart royal arms” will pull up more than enough examples (for example, this one from the Tower of London). 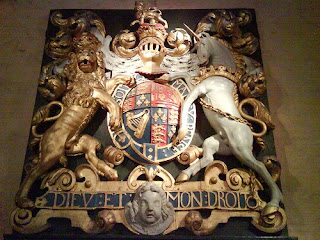