Heraldry in Dallas, Texas, Part One

One of the things that Jo Ann and I began a while back, though not yet finished, is basically an "heraldic survey" of downtown Dallas, Texas, not too far from where we live. Well, that description may not be entirely accurate. I’m doing an heraldic survey; she’s photographing art and architecture, with occasional shots of heraldry. But we’ve been doing it together, which is a good thing, for us and as it should be for any married couple.

One of the things I’ve noticed in doing this survey is that, despite the relative dearth of heraldry in this country, and especially as compared with many similarly-sized cities in Europe, there actually is a fair amount of heraldic decoration that can be found here in Dallas. Now, admittedly, the single largest portion of decoration on buildings that might be considered to be heraldic is blank escutcheons. Blank shields, blank ovals, blank cartouches. Great places to actually place heraldry, completely blank. Sometimes heavily decorated around the sides, but with the center, the shield, blank.

Still, there are some decent coats of arms to be found. And today I thought I’d share one of my favorites. The accompanying photo is from above the front entrance of the Magnolia Building at 1401 Commerce Street. The building is actually best known for the large, formerly revolving, neon-lit sign of the red flying Pegasus which has been on its roof since being erected there in 1934. (It was rebuilt in 1999.) The building used to be the headquarters for the Magnolia Petroleum Company, later Socony (Standard Oil of New York), and finally Mobil Oil (now part of Exxon-Mobil) which still uses the red Pegasus as its logo. It is now the 330-room Magnolia Hotel. 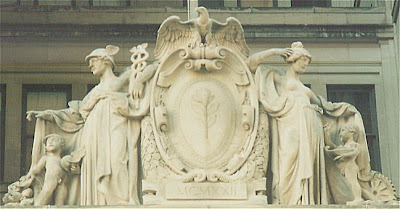 But I digress. Over the Commerce Street entrance to the building is this really great carving with, as its centerpiece, one of the nicest bits of canting arms (that is, arms that are a pictorial pun or allusion to the name) I think I have seen. (Now, these are probably not "real" arms, in that I doubt very much that they have been registered or granted by any heraldic authority, but this is the United States after all, and self-assumption of arms is as legitimate here as any other method of obtaining a coat of arms.) The arms are extremely simple, and are, of course, "a branch of magnolia" with a single flower at the tip. Magnolia trees grow well in this part of the country; I had one in the front yard of my last house. They grow very large flowers whose scent, when they are in full bloom, can be smelled a good city block away.

I have no idea of the tinctures, of course, as there is neither tricking nor hatching to guide one in determining what the colors should be. And yet, certainly, I should be able to speculate as well as anyone else as to what the tinctures ought to be. Given that the branch itself is probably meant to be "proper", that is to say, brown stem and green leaves, and that magnolia blossoms are white, the presumed blazon (if it were to be tinctured at all, which may not be what the designer had in mind) would be: Or, a branch of magnolia blossomed at the tip proper. But tinctured or not, isn’t that a great bit of canting heraldry?
Posted by David B. Appleton at 8:27 AM